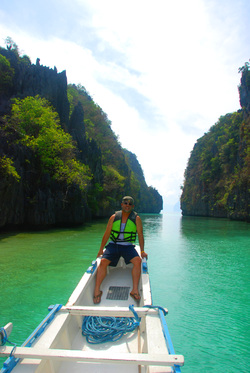 Since Amanpulo is beyond reach for my bleeding pockets, I ended up in El Nido,Palawan as the place to visit this year, after Dos Palmas made a good lasting impression on us last year. Three years ago I planned to see this island but I was a bit reluctant because of transportation issue.

There are only two ways I know to get there. First, taking a regular plane to Puerto Princessa then a 5-hour road trip to the port where you'll take another hour or so to get to the island, Miniloc or Lagen. The second option is to take a 19-seater small twin-engine aircraft directly to the port. A lot faster but having not taken a plane that small, I was a little scared. Ok, I was really scared.Well, guess what? Finally this year, I decided to take the second option. I just made sure to update my life insurance just in case...hehehe.

Nestled in a cove with a backdrop of awesome landscapes and humongous sheer limestone cliffs, at rustic and native-style Miniloc Island Resort is where we stayed for 3 days.

I actually preferred this resort than the more luxurious Lagen Island Resort.

Both are equally awesome but Miniloc is relatively cheaper and much closer to most activities such as kayaking in big and small lagoons, snorkeling, wind surfing, rock-climbing, island-hopping, among other things.

Now, if want to continuously feel connected to the outside world, then Lagen Island Resort is for you as they have tv’s in the hotel-type rooms and wifi connection for you Facebookers. Also, it has a swimming pool for those afraid of the open seas.

Either way, you’ll be able to enjoy both since guests are transport between resorts if one chooses to avail of its amenities.